If you haven’t already, please read the intro first.

In this first post, we’ll discuss development paradigms such as modelstore, layers, models, AOT artifacts and more. If you’re reading this chances are you know most of these details, but I encourage you to read through this as the details are important to understand the changes being made in the new Dynamics AX (AX7).

To roll into this series, we’ll discuss some typical paradigms. Dynamics AX has a system of models and layers (layers have always been there, models were introduced in AX 2012). The layers allow responsible parties to entirely separate their original source code and design artifacts, while allowing the next party (in the chain of vendor to customer) to customize all the code delivered by the previous parties. The number of layers is fixed (although the amount of layers and their names has changed over different versions of AX), and are named after the typical parties involved in an implementation. Within each layer, any number of models can be created. There is always a default model in each layer (called “XYZ model” with XYZ being the name of the layer). Let’s look at what these layers and models represent and how they work.

Assume the case of a table delivered by an ISV, in the ISV layer. It contains one key field, a method, and it overrides the validateWrite() system method. The partner implementing this solution has made some more industry-specific changes, adding a field and extra validations in the validateWrite() method. To do so, they over-layered the table in the VAR layer. Additionally, the customer decides to change the labels on the ISV and the VAR field, as well as add a method.

Essentially, the table itself is now created in ISV, but different parts of it exist in different layers. Now, imagine the customer hiring another third party to make some more changes, who implement those changes in their own model in the VAR layer. Now the table also exists in multiple models in the VAR layer.

Looking at the customizations that were made, there are two distinctions to make. Some elements of the table are CHANGED in a particular layer, other parts are completely NEW. As we’ll see in later posts, in the new Dynamics AX (AX7) the terminology for this is a customization (change) versus an extension (new). When a change is made to an existing element, that element is ‘copied’ from the lower layer (say, ISV) into the layer it is being customized (say, VAR). At this point, the element exists in both layers, but the compiler and runtime of AX will always only use the higher layer version of the element. The name ‘element’ is quite ambiguous here. In our table example, fields and methods are definitely elements that can individually be added or changed (over-layered) in different layers or models. However, there are certain sub-elements that CANNOT be individually over-layered. For example on tables an index is an element that can be individually over-layered, but individual fields in the index are not. The index as a whole will always be copied into the higher layer when customizing. Another example is the datasources node on a form. As soon as you add a method to a datasource or add a new datasource, the whole datasources node is copied into your layer including all the other datasources, methods, fields, etc. Other elements, like Menus for example, do not allow any sub-elements to be over-layered and are always entirely copied. The concept of what element level objects can be over-layered is often referred to as the granularity of objects. Some objects are entirely granular (for example classes, since both the class itself, its methods, and event subscriptions can all exist in different layers and models) and some objects aren’t granular beyond the parent level (like menus). This of course has a major impact on upgrades of code. If the lower layer is updated, the higher layer needs to compare any over-layered elements. So obviously, the less granular an object is, the more work an upgrade will take. Another effect of the granularity has to do with models within a layer. Models have the limitation that within one layer, an element can only exist in 1 model. So the more granular an object’s elements are, the more it can be customized in different models within one layer. In our diagram’s example, if tables were only granular to the table level itself, the VAR layer couldn’t have had a new model that adds another method. With the granularity of tables as they are, a method or field can be added in the same layer in a different model. However, the new VAR model cannot also add a customization to validateWrite(), since that method in the VAR layer already exists in the other VAR model…

Tip: to see granularity of objects, go to your user options in Tool > Options and on the Development tab under “Application object tree” set layer to “show all layers” and model to “show on all elements”. Once those options are on, you will see the layer and model listed for each element in the AOT. If an AOT does not show a layer/model, it means it’s not granular and you have to look at its parent. For example on forms, note how all the controls are granular (they list a layer and model), but individual datasources do not, only the datasources node as a whole does. 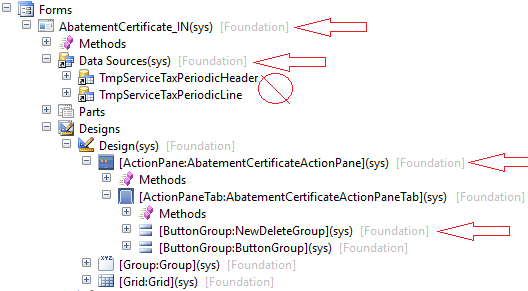